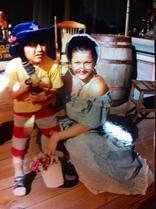 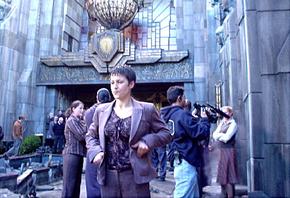 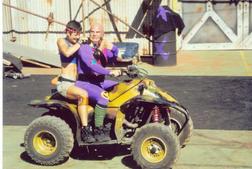 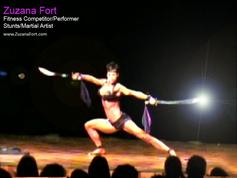 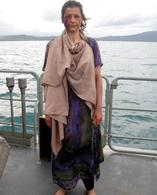 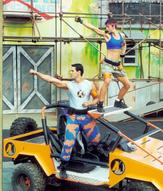 Stunt work is something I pretty much fell into (if you pardon the pun). Sure, I grew up with a big brother and his friends who thought it’d be hilarious to teach me how to kick and punch. Yes, I fell in love with martial arts watching Jackie Chan movies. And yes I did try various martial arts over the years  (JOW GA KUNG FU ACADEMY, WING CHUNG and AUSTRALIAN WUSHU ACADEMY, TAE KWON DO ACADEMY) but stunt work never occurred to me.

It was a chance encounter in my gym that changed all that. A stunt person said I should definitely look into getting a stunt license. Then a numerous theatrical production opened my eyes. I was the intended victim and had to get punched and thrown across the stage (Pentecost) and had my throat slit (Everyman) so I may as well try and do this the proper way. It would be another skill and something to make me more versatile.

I find that when making a decision the universe often helps out, so as I was figuring it whether or not to focus on also becoming a stunt actor I was given the opportunity to work as a motion capture actor/stunt actor in the Xena computer version.

I grabbed the chance and the rest as they say is history. One thing led to another and (no boyfriends) I ended up performing in the live stunt show Action Man Lives 1 and 2 at Sydney’s Wonderland.

This then opened the doors to Universal Studios – Japan (USJ) where I worked as a stunt actor on the TERMINATOR 2-3D SHOW and the HIGH NOON SHOW.

On a professional level I had the great privileged to work and train with Captain Dale Dye and Julia Rupkalvis (now Dye) who are both amazing professionals of the highest caliber. Their intensive army training camp was a revelation and an eye opener, it taught me a lot about myself and how much we as people can actually endure. It also game me an opportunity to meet and works with some fascinating characters - not always human.

Japan also taught me many other valuable skills - stunt skills as well as life skills and work ethics. I made many friends and came back inspired and determined (and also pregnant). Following the birth of my first daughter I found myself energised and ready to launch back into the swing of things. I now had an even greater motivation  - I wanted my child to grow up and be proud of me.

Eventually, after filling out pages of paperwork and submitting copies to the Australian Stunt Committee I gained my accreditation as a Stunt Person (SAP). This then led to working on numerous TV shows, films as well as motion capture and live shows.

in the water (overcoming a paranoia of sharks). It was the cast and crew that truly made it a joy.

on ‘our set’ but also because I met so many wonderful people who became friends.

Always a Winner video hit by Pete Murray, what can I ay, what girl can say no to donning a balaclava and kicking the proverbial c… out of the hero… Loved it and bring it on!

All Saint has always been a pleasure and a real joy; you could hardly call it work. Packed to The Rafters, False Witness and even Gladiators were all amazing experiences which all not only gave me new skills but taught me a lot about my self. And of course SUPERMAN which was just so much fun - dodging flying debris, jumping over burst water pipes and flaming fires and avoiding cars seemingly out of control - beats working in a office.

I have since then become quite focused on ensuring that people realize stunt work is more than just getting hit, it is a truly creative work and stunt people are artists in their own right. I try and always bring acting and character work to all my stunt work. As different characters behave differently in different circumstances so they also fight or fall differently. To put it simply a bad guy will fight dirty whereas the good guy must fight fairly. Can you see Superman sucker-punching Rex Luther? Of course that is simplifying it it but it goes to show how much work actually goes into stunts – ask yourself, does this person know how to fight, how to fall, are they fit, are they tired, are they desperate, are they drunk, are they scared? Everything affects the outcome and so stunt performers are truly actors who happen to perform stunts.